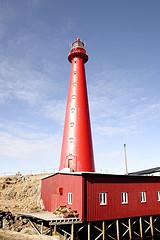 Anyone who wandered in the ocean for weeks or months without seeing a piece of land and, without meeting a single vessel, is well aware how necessary sailor reassuring beacon light and the ability to check mate calculations. In the xviii century seafaring reached a significant size and continued to flourish; need for lighthouses has grown faster than they were built. At the beginning of xix century, around the globe, there were just over 500 lighthouses, the end of the century the number of increased to almost 5000. All of them were built on the shore, on rocks, land on solid ground. Construction of buildings on the water, and even in places open to the waves and wind, it was technically feasible. Then came the idea of creating floating beacons. The first of them – "Nora" – to anchor at the entrance to the Thames in 1732. And though it was only an ordinary fisherman's boat, distinguished from other lights, raised to Ray, he was the ancestor of the whole galaxy ships, the sailors deserved friendly name ". Second lightship England appeared only four years later. At the beginning of the xix century on the globe there were no more than five, as Operation "plavuchek" dispensed 8-10 times more expensive coastal lighthouses. Until the seventies lightship served random trial, set to anchor in a designated place. The day they could be recognized by any figures, raised on the mast at night – on additional lights. In the twentieth century, for incurring Lighthouse Authorities began to build special ships.